The best fashion books for fall 2015 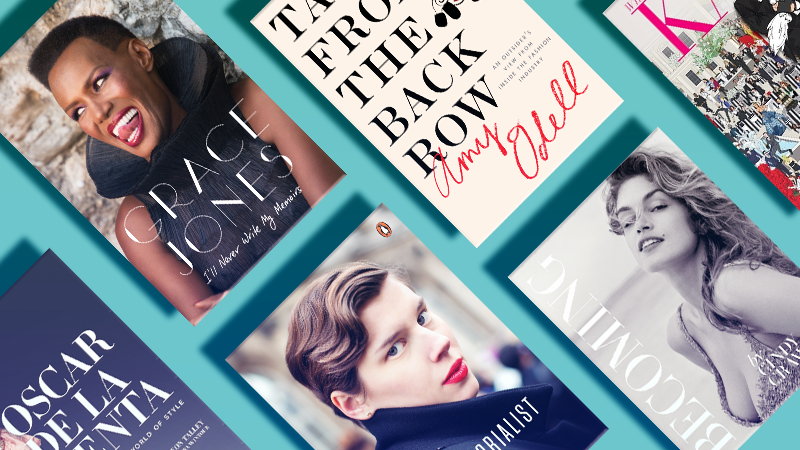 Scroll down to see more images

We’ve already given you a rundown of everything you need to watch on TV this season, and since you’ll be parked on the sofa anyway, could we suggest some good reads to pass the time between prime time shows. ?

This fall, some of the biggest names in fashion are adding “published author” to their resumes, including Cindy crawford, Donna Karan and Garance Doré. From glossy books to eye-opening memoirs, scroll through 10 Tomes Every Fashion Lover Should Add to Their Reading List.

Tales from the back row by Amy Odell ($ 25, available now from Simon & Schuster)

From the outside, the fashion industry seems to be all about glamor, but writer Amy Odell aims to dispel that myth with her debut book. The fashion editor recounts her rise from the ranks of a party journalist for new York magazine to The Cut’s premier blogger (she is currently editor-in-chief of Cosmopolitan.com), and recounts clashes with industry titans such as Anna wintour and Rachel Zoe-all with a spirit of self-deprecation and biting. While this memoir is certainly not lacking in voyeurism, it also offers a balanced account of what it is. really enjoys working in (and writing about) the fashion industry.

Karl Lagerfeld get it Where’s Waldo? treatment in this illustrated book, which follows fictional style blogger Florence de la Sabine as she tries to hunt down the elusive designer and globetrotter for a career interview. Her quest takes you through 15 places frequented by the fashion crowd – from the Met Gala in New York to Tulum’s Coqui Coqui Beach – and features cameos from Kim kardashian, Ricardo Tisci and even the Kaiser’s beloved cat, Choupette.

For those who were unable to visit the SCAD Museum of Art’s Oscar de la Renta tribute exhibit this spring, this stunning tome offers another chance to see 70 of the dresses on display, many of which were custom-made for clients. private individuals such as Diana. Taylor and Hillary Clinton. Like the exhibition, the book is organized by André Léon Talley, who was a close friend of the late designer and therefore has many insider memories to share.

I will never write my memoirs by Grace Jones ($ 26.99, available September 29 at Gallery Books)

Long before androgynous models and unisex clothes were all the rage, Grace Jones made his way onto the catwalks for Yves Saint Laurent and Kenzo Takada. Jones’ striking, sexist look landed him on the covers of Vogue and She, and her brilliant modeling career allowed her to get into acting and singing. In this reluctant autobiography, she talks about everything in great detail, from her strict Jamaican upbringing and modeling days in Paris to her escapades at Studio 54 and her unfiltered thoughts on today’s pop stars.

To become by Cindy Crawford ($ 50, available September 29 at Rizzoli)

We don’t know what is more surprising: that this coffee table book is Cindy crawfordof her debut in publishing or that the model turns 50 this year (she looks amazing). To mark her milestone birthday, she is releasing this retrospective of her impressive career, which features personal essays associated with 150 images of Crawford taken by legendary photographers such as Helmut Newton, Richard Avedon and Irving Penn.

This is what fashion is: lessons and stories from my nonstop life, mostly glamorous and in style by Joe Zee ($ 29.99, available October 13 from Thomas Dunne Books)

Joe zee is one of the fashion industry’s most beloved figures, and his affable personality, as well as his high-visibility television appearances on The city and Ugly Betty– made him a household name. While he wrote a few books in the name of She magazine during his tenure as Creative Director, this is the first full-fledged memoir from the editor of Yahoo Style. Regardless, Zee stays true to her personal brand by balancing ingenious on-the-job stories with useful style tips for everyday women.

Coco Chanel: the illustrated universe of a fashion icon by Megan Hess ($ 24.96, available October 13 at Rizzoli)

Even if you don’t know Megan Hess’s name, you’ve probably seen her work: The fashion illustrator draws regularly for luxury brands such as Cartier, Dior, and Tiffany & Co. For her third book, she focuses on another of its high-end clients: Chanel (or rather the legendary homonymous founder of the house). Using her signature Montblanc pen, Hess brings the designer’s story and iconic designs to life – quilted bags, ballerinas, little black dress – alongside classic Coco Chanel quotes and historical snippets.

When Donna Karan stepped down as chief designer for her eponymous brand in July, it was the end of an era, so consider this autobiography her farewell gift. While this covers her solid career and the growth of her business, Karan also gets very personal as she discusses her strained relationship with her mother, her romantic struggles and her spiritual side (she has tried everything from silent retreats to therapy. leeches), so expect a holistic take on the woman behind one of America’s most influential labels.

Creative from Corsica Garance Doré was one of OG’s street style photographers (alongside her ex, Scott schuman, which released her own title the same day (see below) and has been blogging on her eponymous site since 2006, so it’s about time she landed a book deal like every other internet sensation. Part memory, part guide to living an elegant life, Doré’s publishing debut features all-new illustrations and photos, and explores beyond the superficial pursuits of fashion and beauty.

Over the past decade, Scott schuman has roamed the sidewalks of every major fashion capital in search of stylish locals to capture for his hugely popular site, The Sartorialist. But his third photo book took the jet set photographer even further to less obvious places such as Peru, India, Dubai and South Africa, offering a truly global perspective on personal style.